The Difference Between Vedic Astrology and Western Astrology 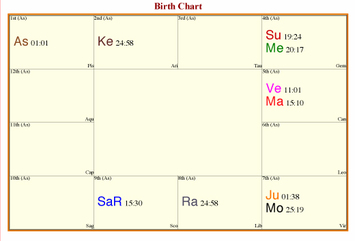 There are three common means of drawing a horoscope. Most western astrologers use a circle with the houses divided like slices of a pie. The north Indian Vedic astrologers present a square cut into triangles for the houses/signs and the south Indian presentation is all square boxes within a larger square. All are showing the same thing, but in a different “language” you might say. If you are only familiar with Western astrology the Vedic chart may seem to have the planets in one sign earlier than westerner astrologers have told you.

The difference between the two systems of calculating orbital positions is that the Vedic system uses the Sidereal zodiac and most Western astrologers use the Tropical zodiac. The Sidereal zodiac uses the 27 constellations, or fixed star groups, as the backdrop against which the planets’ orbits are calculated. Aries, the first sign of the zodiac, begins with the first constellation, called Aswini, at 0 degrees. In the tropical zodiac, the point in space when the Sun crosses the earth’s equator is the beginning point of the zodiac, or Aries.

It should be noted that the astronomically correct system of calculation of the planets’ orbits is the Sidereal, which is what every astronomer in the world uses. We must have exact astronomical calculations to be able to uncover a person’s karma brought with them into this lifetime, and the events that will transpire for them during life.

The time cycles which are unique to Vedic astrology allow a qualified astrologer to understand exactly when certain forces will come to bear, meaning when we achieve goals, get married, have children, what kind of work we do, our natures and even our spiritual and philosophical proclivities. This Vedic system gives exacting and accurate information in its predictive techniques, using planetary periods called “dashas”, as well as transits affecting the natal chart to accurately portray the timings of events to unfold in an individual’s life.

The astronomical difference can be explained as follows. The earth’s equator moves backwards through the signs of the zodiac at approximately 51″longitude annually. This is called the “precession of the equinoxes.” Therefore the western zodiac is using imaginary points for the signs, which move back constantly from the signs used by Vedic astrologers and astronomers by about 1 degree every 72 years. At about 300 AD the two zodiacs were aligned, but due to the precession of the equinoxes, presently there is approximately a 24-degree difference. Therefore all of the planets in a Vedic horoscope, as well as the rising sign, will be about 24 degrees earlier than they would be in a Western chart.

At the end of the day the Vedic astrological system provides the greater objective accuracy in its predictive aspects, understanding a person’s nature, their physical health and the karma we bring into this life, than the western astrological system can offer. Therefore it becomes a sacred tool for gaining knowledge of our personal future in this world, and how we can shape our destiny towards the greatest possible successes in all our endeavors, both materially and spiritually.

Howard “Hamsa” Beckman is a master Vedic Astrologer with over 35 years experience. As a teacher of Vedanta and Vedic science he travels worldwide teaching the interconnection of the “Three Sister Sciences” of Ayurveda, Yoga & Vedic (Jyotish) Astrology....read more